As you can see from the Biblical model of marriage (summarized above), it was necessary that the bride prepare her own bridal garment for the big day. During the time of preparation, she remained in her father’s home, making herself ready. This preparation meant making her own wedding gown, getting ready for her new role as a wife, transferring her allegiance from her father to her new husband, and so forth. Cohabitation was forbidden at this time, since the bride must remain a virgin. The goal of this in-between time was that she would be presented to her future groom as a chaste and pure virgin.

This was not only true for Jewish brides; it is also true in the Christian life. At the end of our “preparation time” (our betrothal), we are to be presented to Christ as a pure virgin.

Ephesians 5:27 describes the way that this will occur: “That He [the Lord] might present [the church] to Himself a glorious church not having spot or wrinkle or any such thing; but that it should be holy and without blemish.” Paul added to this by saying, “That I may present you to Christ as a chaste virgin” (2 Corinthians 11:2).Chaste (#53, hagnos) is the root from which hagiosmos (#38) comes from. Hagiosmos means “sanctified.”

Notice, however, the words might and may in the two above verses. They indicate that it’s God’s will to present us “as a chaste and holy virgin, without spot or wrinkle,” but it’s not a given. In other words, it’s not automatic. Something is required of us! We must participate in the action. We must prepare ourselves, just as a Jewish bride does.

So according to the Biblical model, the presentation of the bride to the Lord is conditional. She must not only be presented as a “chaste virgin, not having spot or wrinkle” (Ephesians 1:4), she must also be sanctified, holy, and without blemish (Hebrews 12:14).

What this is saying is that there is a possibility that while we are here on earth waiting for Christ to return, we can deﬁle our garments and prevent this from happening.

We will expand in later issues upon the two different kinds of garments a believer can wear. The first one is the Garment of Salvation that Christ imputes to us at our new birth (Isaiah 61:10). This is our externalgarment without spot or wrinkle. The second garment and the one that Christ requires for the Marriage festivities is the white linen garment made up of the believer’s own “righteous works”; i.e., the “fruit” from his life. (Revelation 19:7–8) Revelation 3:5 tells us that overcomers will be clothed in white garments. This speaks of the internal sanctification and the moral ﬁtness that Christ requires of His Bride. (2 Corinthians 7:1; 11:2)

This second garment, then, is the one that can get defiled, stained, and blackened through the believer’s own negligence.

Remember, God said to the Church at Sardis: “There are a few who have not defiled their garments.” (Revelation 3:4)

Defile here means “a stain or a blackening of something.” It refers to an internal condition, a moral or spiritual transgression. It simply means “unfaithfulness.” As Strong’s puts it: “It means dirtying our clothes.” As Christians we dirty our clothes by not being faithful and by quenching His Spirit.

Let me be clear: I am not saying that a believer must be sinless. All believers sin at various times and it’s only when we confess and repent of our sin that we can once again be clean. 1 John 1:9 has to become a part of our lives: If we confess our sins, He is faithful and just to for-give us our sins, and to cleanse us from all unrighteousness… 1 John 1:9

The “holy ones without blemish” in Ephesians 5:27 are those believers who have chosen to do just that in order to keep themselves clean, prepared, and ready. They are the sanctified ones. They have continued to “put off” their sin and self and “put on” Christ. They are now arrayed in ﬁne linen, clean and white.

This garment does not refer to the “righteousness of Christ,” which has been imputed to them (Isaiah 61:10), but rather to their own righteous deeds.

Let us be glad and rejoice, and give honour to Him: for the marriage of the Lamb is come, and His wife hath made herself ready. (Revelation 19:7, 8)

In other words, these believers have chosen to make themselves ﬁt, prepared, and ready. They are sanctified, holy and chaste virgins.

James 1:27 exhorts us to keep ourselves “unspotted” (see also Revelation 3:4–5; 2 Corinthians 7:1; 11:2–3). “Blessed is he that watcheth and keepeth his garments” (Revelation 16:15). These are the ones who will be deemed worthy to enter the bridal chamber because they have on the appropriate wedding garments.

God desires to present us to Himself a glorious church, having no surface defects, holy and without blemish. But He does not coerce His subjects; He respects our will. We can of our own choosing fall short of the glory of God, by not daily confessing our shortcomings (Hebrews 12:15).

Speaking of the importance of being prepared, ﬁt, and ready for Christ’s soon return, the parable of the ten virgins in Matthew 25 is very appropriate.

There are many interpretations of this parable, so again, be as the Bereans and study the Scripture for yourself. Remember, a parable is simply a truth told in story form to help explain a previous truth. The previous truth in Matthew 24 is to watch, be ready, and endure to the end, for you know not what hour the Lord comes.

The parable of the ten virgins follows: 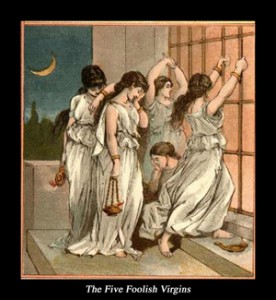 Then shall the kingdom of heaven be likened unto ten virgins, which took their lamps, and went forth to meet the bridegroom. And ﬁve of them were wise, and ﬁve were foolish. They that were foolish took their lamps, and took no oil with them: But the wise took oil in their vessels with their lamps. While the bridegroom tarried, they all slumbered and slept. And at midnight there was a cry made, Behold, the bridegroom cometh; go ye out to meet him. Then all those virgins arose, and trimmed their lamps. And the foolish said unto the wise, Give us of your oil; for our lamps are gone out. But the wise answered, saying, Not so; lest there be not enough for us and you: but go ye rather to them that sell, and buy for yourselves. And while they went to buy, the bridegroom came; and they that were ready went in with him to the marriage: and the door was shut. Afterward came also the other virgins, saying, Lord, Lord, open to us. But he answered and said, Verily I say unto you, I know you not. Watch therefore, for ye know neither the day nor the hour wherein the Son of man cometh.  (Matthew 25:1-13)

Note that ten virgins took their lamps (torches ﬁlled with oil) and went out to meet the bridegroom. Five of those virgins were wise because they took extra oil. The other ﬁve virgins, however, didn’t bring extra oil and thus, were foolish.

Vines Complete Expository Dictionary says that the number 10 (Strong’s #1176, deka) is a very significant number. It’s used 248 times in the Bible and means “the measure of human responsibility” and also the number of “completion.” Virgin (Strong’s #3933) means “an unmarried woman.” The word wise (Strong’s 5429, phromiros) means “single-minded” (i.e., one life is being lived—God’s) and thus, these believers were full of light (Luke 11:34). The word foolish (Strong’s # 3474, moros) means “double-minded” (i.e., two lives are being lived—God’s and our own), and thus, these believers are full of darkness (Luke 11:34).

While waiting for the bridegroom, all ten virgins slept. But at midnight a cry was made that the bride-groom was coming and they were to go out and meet him. All the virgins arose and trimmed their lamps (adjusted them), but the foolish found that their lamps had gone out and they had no oil to reﬁll them. They asked the wise if they could have some of their oil, whereupon the wise said, “We cannot let you have our oil because there will not be enough for us. Why don’t you go and purchase some for yourselves?”

While the ﬁve foolish virgins were gone trying to ﬁnd extra oil, the bridegroom came and those wise virgins who were ready, worthy, and prepared (who had their lamps lit) went in with him to the wedding festivities and the door was shut.

Later when the ﬁve foolish virgins came, they said, “Lord, Lord, open the door.” But he answered them saying, “I know you not” (Matthew 25:12).

The Greek word used here for know is oida (Strong’s #1492), which means to see, to perceive or to “know intimately.” The Lord was saying to the ﬁve foolish virgins: “I don’t know you intimately; we don’t have a close relationship. If we did, you would have obeyed Me and brought more oil.” In other words, there was no fellowship between them. The Lord only knew them by observation.

The ﬁve foolish virgins in this parable obviously are in heaven. But because they didn’t know (oida) the Lord intimately, He didn’t let them in to the wedding ceremony. They were not qualified to enter.

The accuracy of the Scriptures continues to amaze us. When you peel back all the details, the Bible is an absolute treasure hunt! For example, earlier in Matthew (Matt. 7:23), where Jesus is talking to those who professed to be Christians, who professed to have prophesied in His Name, who cast out devils in His Name, and who said they had done many wonderful works in His Name, He didn’t say, “I know you not,” like He does here in Matthew 25. He says, “I never knew you.” And the Greek word He uses for I never “knew” you is ginosko, which means “to have knowledge of.”

The key to both is the “knowing.”

A friend of ours sent us the following quote and it seems so applicable here: “Far above all the doing... it seems the knowing is where we need to focus…and let the doing spring forth from the real knowing.”